The European Commission is the executive body of the European Union, the one in charge of proposing legislation to the Parliament and the Council and of enforcing it, implementing decisions and ensuring the compliance with the EU treaties.

In this particular sense, the Commission is responsible of taking a country before the European Court of Justice if it doesn’t comply with the European treaties and European law.

She succeeded Jean-Claude Juncker, who has been President of the European Commission from 2014 to November 2019.

The EPP holds regular meetings with the Commissioners belonging to the political family (10 out of 28 in the current Commission) and some of them are attached to the activities of the party being EPP Vice Presidents or chairing EPP Ministerial Meetings.

Overview of the Commissioners

Von der Leyen served in the federal government of Germany from 2005 to 2019 as the longest-serving member of Angela Merkel's cabinet.

She was born and raised in Brussels, where her father Ernst Albrecht was one of the first European civil servants. She was brought up bilingually in German and French, and is of German and British American descent. She moved to Hanover in 1971, when her father entered politics to become Minister President of the state of Lower Saxony in 1976. As an economics student at the London School of Economics in the late 1970s, she lived under the name Rose Ladson, the family name of her American great-grandmother from Charleston, South Carolina. After graduating as a physician from the Hanover Medical School in 1987, she specialized in women's health. In 1986 she married fellow physician Heiko von der Leyen of the noble von der Leyen family of silk merchants. As a mother of seven children, she was a housewife during parts of the 1990s and lived for four years in Stanford, California, while her husband was on faculty at Stanford University, returning to Germany in 1996.

In the late 1990s, she became involved in local politics in the Hanover region, and she served as a cabinet minister in the state government of Lower Saxony from 2003 to 2005. In 2005, she joined the federal cabinet, first as Minister of Family Affairs and Youth from 2005 to 2009, then as Minister of Labour and Social Affairs from 2009 to 2013, and finally as Minister of Defence from 2013 to 2019, the first woman to serve as German defence minister. When she left office she was the only minister to have served continuously in Angela Merkel's cabinet since Merkel became Chancellor. She has been deputy leader of the CDU since 2010.

von der Leyen is the first woman to become President of the European Commission.

Valdis Dombrovskis (born 5 August 1971), originally from Latvia, is the Executive Vice President of the European Commission and Commissioner for An Economy that Works for People, and Trade.

Dombrovskis has been a Member of the Board of the New Era Party since 2002. He was Minister of Finance of Latvia from 2002 to 2004 and a Member of the Latvian Parliament during its 8th parliamentary term (2002–2004). Then he was Observer at the Council of the European Union.

Dubravka Šuica (born 20 May 1957) is the Commissioner for Democracy and Demography and Vice-President of the European Commission. She is a Croatian politician who has been a member of the European Parliament since 2013.

A member of the center-right Croatian Democratic Union (HDZ), Šuica served two consecutive terms as mayor of Dubrovnik between 2001 and 2009. She was the first female mayor of Dubrovnik and one of the first females mayors of major Croatian cities in modern Croatia. She had been a member of the Croatian Parliament in three terms from 2001 to 2011. Since 2004, she has been elected five times in a row as Vice-President of the Congress of Local and Regional Authorities of the Council of Europe.

Following the 2019 European election, Schinas was nominated to serve as the European Commission Vice president for “Promoting our European Way of Life”, who will be responsible for upholding the rule-of-law, migration and internal security. He became the first Greek to hold such a high-ranking position in the Europe's top decision-making body.

Johannes Hahn (born 2nd of December 1957), originally from Austria, is the European Commissioner for Budget and Administration and is also a Vice President of the European People’s Party.

Involved since an early age with the Austrian People’s Party (ÖVP), Hahn was elected in 2004 as leader of the regional branch of the ÖVP of Vienna. In 2007 he was proposed by his party as Minister of Science and Research in the grand coalition government. He occupied that position until his appointment to the European Commission after the 2009 European elections. During the second term of Barroso’s Commission he served as the European Commissioner for Regional Policy.

Mariya Gabriel is the current Commissioner for Innovation, Research, Culture, Education and Youth. She is also a Vice-President of the European People's Party.

As a Commissioner she is guiding EU policies relating to the Horizon Europe programme, innovations and research, the Erasmus + programme, education and culture. Her vision for this portfolio encompasses Europe as leader in the digitalisation and the fight against climate changes. She was previously the Commissioner for Digital Economy and Society from 2017-2019.

For her productive work as Commissioner, Mariya Gabriel has been honoured with numerous awards. Among them is the award “Women of Influence 2018” in the category “Talent in Politics”, the most prestigious Italian prize “Golden Apple” for highest achievements for women, the Beaumarchais Medal for her contribution in the protection of the interests of European artists.

Since 2012 Mariya Gabriel has been Vice-President of EPP Women. As Commissioner she has been working on the cause of women rights and their better representation in the digital economy and society.

Adina-Ioana Vălean (born 16 February 1968) is the European Commissioner for Transport.

Vălean became a Member of the European Parliament on 1 January 2007, with the accession of Romania to the European Union. She has since been serving on the Committee on Industry, Research and Energy; in 2019, she became the committee's chairwoman. During her time on the committee, she was the Parliament's rapporteur for the Connecting Europe Facility (CEF) and the European Union roaming regulations.

From 2014 to 2017, Vălean was one of the Vice-Presidents of the European Parliament under the leadership of President Antonio Tajani; in that capacity, she was in charge of information and communications technology (ICT). She also chaired the Committee on the Environment, Public Health and Food Safety from 2017 until 2019 and served on the Committee on Petitions from 2009 until 2014.

In addition to her committee assignments, Vălean has been part of the Parliament's delegations with the countries of Southeast Europe (2007-2009); the Euronest Parliamentary Assembly (2009-2014); and the United States (since 2014). She is also a member of the Transatlantic Legislators' Dialogue (TLD); the European Internet Forum; and the European Parliament Intergroup on Long Term Investment and Reindustrialisation.

Olivér Várhelyi (born 22 March 1972 in Szeged) is the European Commissioner for Neighbourhood and Enlargement.

Várhelyi obtained a Master of European Legal Studies at Aalborg University, Denmark, in 1994, and a Law degree at the University of Szeged, in 1996. In 2005 he passed the bar exam.

Várhelyi started his career in the Hungarian public administration in 1996 at the Ministry for Industry and Trade. He then moved to the Foreign Affairs Ministry, where he was tasked with alignment with the EU acquis. From 1998 to 2001 he was chief of cabinet of the head of the legal unit of the ministry. He then moved to Brussels at the Hungarian's mission to the EU, as legal counselor and then head of legal service until 2006, after Hungary's EU accession. For two years Várhelyi then served as head of the EU law department at the Hungarian Ministry of Justice.

From 2008 to 2001 he briefly served as head of unit at the European Commission, in charge of industrial property rights at the Directorate General Internal Market and Services. He then moved back to the Hungarian foreign service, service from 2011 onward as deputy head and then from 2015 head of the Permanent Representation in Brussels, with the rank of ambassador extraordinary and plenipotentiary.

Stella Kyriakides (born 10 March 1956) is the European Commissioner for Health and Food Safety.

Kyriakides is a Cypriot psychologist and politician of the conservative Democratic Rally party. She served as the first Cypriot national and third woman President of the Parliamentary Assembly of the Council of Europe.

In addition to her parliamentary activities, Kyriakides has been serving as the chairperson of the delegation of Cyprus to the Parliamentary Assembly of the Council of Europe (PACE) from 2012 until 2019. From 2016 until 2018, she chaired the Committee on Social Affairs, Health and Regional Development. From 2018 until 2019, she served as PACE representative to the Venice Commission.

Since 2013, Kyriakides has been serving as vice president of the Democratic Rally party, under the leadership of its president Nicos Anastasiades.

Mairead McGuinness (born 13 June 1959) is an Irish politician and European Commissioner for Financial Stability, Financial Services and the Capital Markets Union since October 2020.

The Group of the European People’s Party (EPP Group) is the largest in the European Parliament. It brings together centre and centre-right pro-European political forces from the Member States of the EU, coming together to advance the goal of a more competitive and democratic Europe, closer to its citizens, and a social market economy. 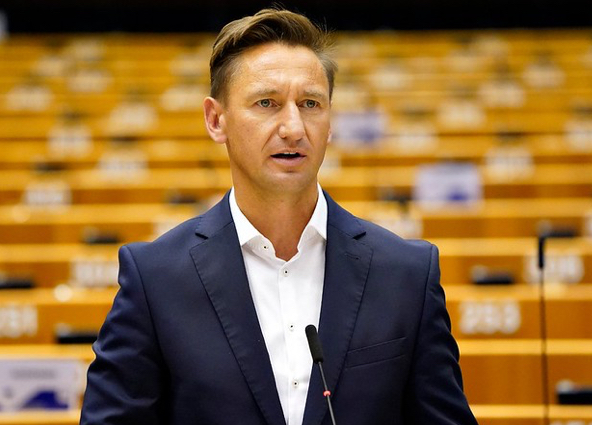 Committee of the Regions

The European People’s Party has the largest political Group in the Committee of the Regions (CoR). Chaired by Olgierd Geblewicz (Civic Platform), the EPP Group is the CoR’s driving force in the EU decision making process.