EPP President's statement at the EPP Summit in Paris, 10 March

EPP parties spearheaded the entry of Finland and Sweden to NATO

Tomorrow: EPP leaders to meet ahead of European Council – list of participants 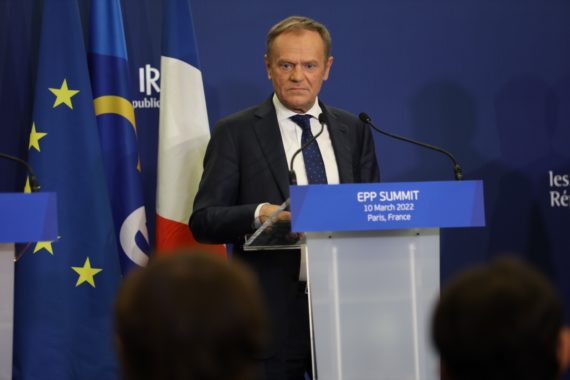 It is with great satisfaction that I participate today in this meeting with you, and in the presence of the leaders of Les Républicains, Christian Jacob, and the Presidential candidate, Valerie Pécresse. Unfortunately, we are meeting in the shadow of the very sad, or even should I say tragic circumstances of the war taking place in Ukraine. All of us are deeply moved by the heroism of the Ukrainian nation and by its suffering. A moment ago we approved the position of our parties and their leaders univocally condemning the Russian aggressors. We call for the EU institutions to work towards granting EU candidate status to Ukraine, in line with Article 49 of the Treaty on European Union and on the basis of merit, and, in the meantime, to continue to work towards its integration into the EU single market along the lines of the Association Agreement, as proposed by Les Républicains. And now we know that the news from Turkey is not good. We also don’t know whether the Russians will attack, today or tomorrow, using chemical or biological weapons against the inhabitants of Kiev and of other Ukrainian cities, as the Americans are warning us about. The recent days only indicate that black scenarios are more likely. The West, including the European Union, must be more united than ever, against Russia and the war it has provoked. This war is not a local conflict on the peripheries of our world, it is a global confrontation, which de facto started many years ago, on many fronts, and in many dimensions. Putin has been openly declaring, for some years now, that his goal is to destroy the international rules-based order, and the key principle of his policy is “might is right”. If this principle prevails, no-one will be safe. Our every weakness, our every concession will be used against us, not only against Ukraine. Europe cannot allow itself any form of appeasement. Today, any variant of appeasement will be synonymous with submission, and as a consequence, with capitulation to the aggressor. If we want to avoid global military confrontation, we must as the West, act together, decisively, and with no illusions. Even if we will pay a high price for it. The tougher the sanctions, the greater our solidarity with Ukraine, the bigger the chance to avoid the worst-case scenario, that is war on our territory.   We must also put up effective resistance against the aggressive actions undertaken by Russia inside our countries. Disinformation, cyberattacks, provocations, assassination attempts, as well as acts of political nature inspired and financed by the Kremlin, all this is also war, only in a different dimension and with the use of other tools than tanks and bombs. For now.   Putin has built a wide network of allies and useful idiots, in Europe and in America. Whether consciously or not, selflessly or for money, the far-right, far-left, and sometimes even mainstream politicians, support his actions and promote his ideas. Donald Trump, Marine le Pen, Eric Zemmour, Victor Orbán, Matteo Salvini, the authors of Brexit, Eurosceptics, and the opponents of transatlantic ties, they are all working hard towards Putin’s victory and his ideas. I don’t need to add what consistent allies of Putin are in numerous business circles, with gas business at the forefront, of whose grim symbol is the former German Chancellor Gerhard Schroeder and Nord Stream 2. The pro-Putin Internationale is active in many spheres, the example of which is the recent news about Marine le Pen’s presidential campaign being financed by a Hungarian bank. De-Putinization, or in other words, liberating the European public sphere, as well as Europe’s politics and the media, from the Kremlin’s influence, has become the necessity of the moment. Calling things what they are, exposing hypocrisy and dishonesty, is one of the ways. Just imagine how helpless against Putin’s aggression, the West would be today, if Trump were still the US President. And if France were led by le Pen or Zemmour, or Italy by Salvini together with Ms. Meloni. The time has come to finally realise the high stakes of the game being played today, and of what great importance, for France, for Europe, and for the whole world today is who will take part in the second round of the presidential elections. Valerie, I wish you a successful debate and an effective campaign.

EPP parties spearheaded the entry of Finland and Sweden to NATO

Tomorrow: EPP leaders to meet ahead of European Council – list of participants